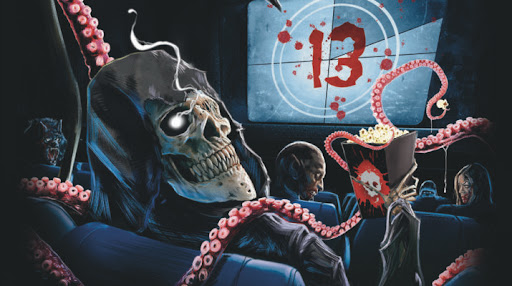 Grimmfest holds a sacred place on my calendar, with the 2021 festival marking my 10th visit as Grimmfest hits its 13th year. I can remember vividly the first time I ever attended Grimmfest – ‘Manchester’s International Festival of Fantastic Films’ – as it opened my eyes to a world of genre cinema and a way of experiencing films that made it more of an occasion; a brilliant celebration of all things horror.

It now takes place in the Odeon Great Northern so I no longer have to contend with uncomfy seats of the Manchester Dancehouse, where I first fell in love with the event in 2012. It also benefits from an improved cinematic experience with larger screens and immersive surround sound.

After a year away from the cinema due to the pandemic (Grimmfest thankfully spoiled us all last year with a virtual event), it was incredible to be back in familiar surroundings, amongst friends I have made over the years who were just as excited as I was to be back in the place that feels like our second home.

This year the films were split between two screens and a virtual event that took place over the subsequent weekend, so with careful planning, I made it my mission to watch every single film across the two parts of the festival. As always, the Grimmfest programming team treated us to a huge variety of films from all parts of the globe that covered every notable horror subgenre and more.

There were dozens of guests including cast and crew from the films and this adds so much to the experience when you get to hear from the creative team behind the films. This is definitely the way films are meant to be enjoyed; with a like-minded audience and a follow-up Q&A session that gives you an invaluable insight into the filmmaking process and helps you to unpack the deeper meanings that may escape you on a first viewing.

Out of a total of 31 feature films and dozens of excellent short films, these were my personal highlights from this year’s Grimmfest:

Move over Train to Busan, there’s a new zombie extravaganza in town and this time its from Taiwan! The Sadness ramps up the zombie action and depravity with an inventive twist on how the virus affects the victims, leading to a relentless assault of deeply disturbing violence that pushes the boundaries of transgressive horror and cakes the screen in blood. This should be a huge hit when it gets a wide release – add this to your watchlist, you won’t regret it!

A downright disturbing, dialogue-free, experimental horror about three women who wake up in a nightmarish hospital where they each find that they are either unable to speak, hear or see. My full review of this divisive film can be found here.

This hilariously creepy anthology heralds the arrival of a superb new talent in director Pierre Tsigaridis who takes influence from 70s exploitation and the films of Argento to deliver a sublime modern take on witchcraft. The two terrifying tales showcase an astonishing amount of flair from a first time director, who takes us on a wildly unpredictable ride that is clearly made out of a passion for the genre.

Jim Cummings is well on the way to stardom with his latest twisted outing. This ingenious black comedy revolves around an inspired script that fuses the satire of American Psycho with the surreal mystery of Under the Silver Lake. An excellent central performance from Cummings is bolstered by a satisfying screenplay that allows him to indulge in a number of his hilariously scathing monologues that fans of his feature debut, Thunder Road, will be delighted to see once again.

A Jewish dinner party taking place in a glamorous Hollywood mansion descends into carnage and mayhem as the guests turn violent when an argument escalates. This was so much fun, with a great build-up and a generous helping of black comedy that isn’t for the easily offended.

I would encourage our readers to check out all five of these films and would love to hear from you if you have any memorable film festival experiences to share with us.

The seats of the Manchester Dancehouse were more nightmare inducing than any horror film.

Pretty keen for The Sadness and the other films all seem pretty interesting too. I miss all the UK horror festivals 🙁