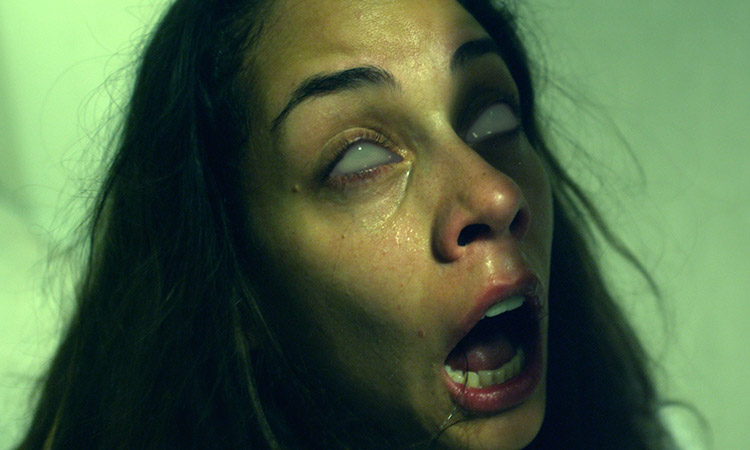 During the incredibly violent and memorable opening scene of Forgiveness, you are likely to realise that this is going to be a heavy viewing experience, even for horror fans who are accustomed to stark brutality and harrowing imagery.

We are introduced to three scantily-clad young women who take the life of a man who is tied up, naked on the floor, before they proceed to inflict life-threatening injuries on themselves, in the grimy setting of what one can only assume is a brothel or some kind of crack den. The film then takes us on a nightmarish journey through a hospital you would not want to end up in, as each of the women wake up to the revelation that one of their senses is no longer functioning properly.

The first of these three hellish chapters focuses on a woman who is unable to speak as she navigates the hospital in search of help or a way out. This is where the film really takes off, as it is shot in just eight meticulously executed long takes that amplify the claustrophobia and confinement of the stark hospital rooms and endless abandoned corridors, ramping up the tension and making the viewer feel as trapped as the first protagonist in this seemingly never-ending hell hole.

A striking sonic soundscape adds a pervading sense of doom to the unsettling ambience as other unhinged patients and threatening hospital staff cross the path of this woman, tormenting and berating her with their cruel and violent actions. We learn little of how she arrived here or what is happening as the film is almost entirely dialogue-free; this is not a film that follows a conventional narrative but instead one that embraces an ambitious, experimental form of storytelling that focuses on mood and atmosphere – and it does this incredibly well.

In the other two chapters of this terrifying experience, we endure the uncomfortable awakening of a woman who realises she cannot hear and another who is horrified to find that she is unable to see. All three separate chapters take place in the same location, though the gruelling encounters the characters face differ vastly, offering loose parables that lack any form of redemption or a clear explanation, instead of allowing the audience to interpret events how they see fit.

Those expecting a neat resolution or a denouement packed with social commentary may be disappointed – this is not a film with a message but it doesn’t need one. It provides an unforgettably disturbing portrayal of an agonising journey for three women who face a living nightmare that may just prove to feel far too real for those of a sensitive nature. Forgiveness presents us with one of the year’s boldest visions that is highly likely to divide audiences due to Director Alex Kahaum’s ambitious and unconventional approach. However, if Forgiveness connects with you on the same level that it did with me, this may well be a bleak and relentless journey into darkness that will haunt you for eternity.