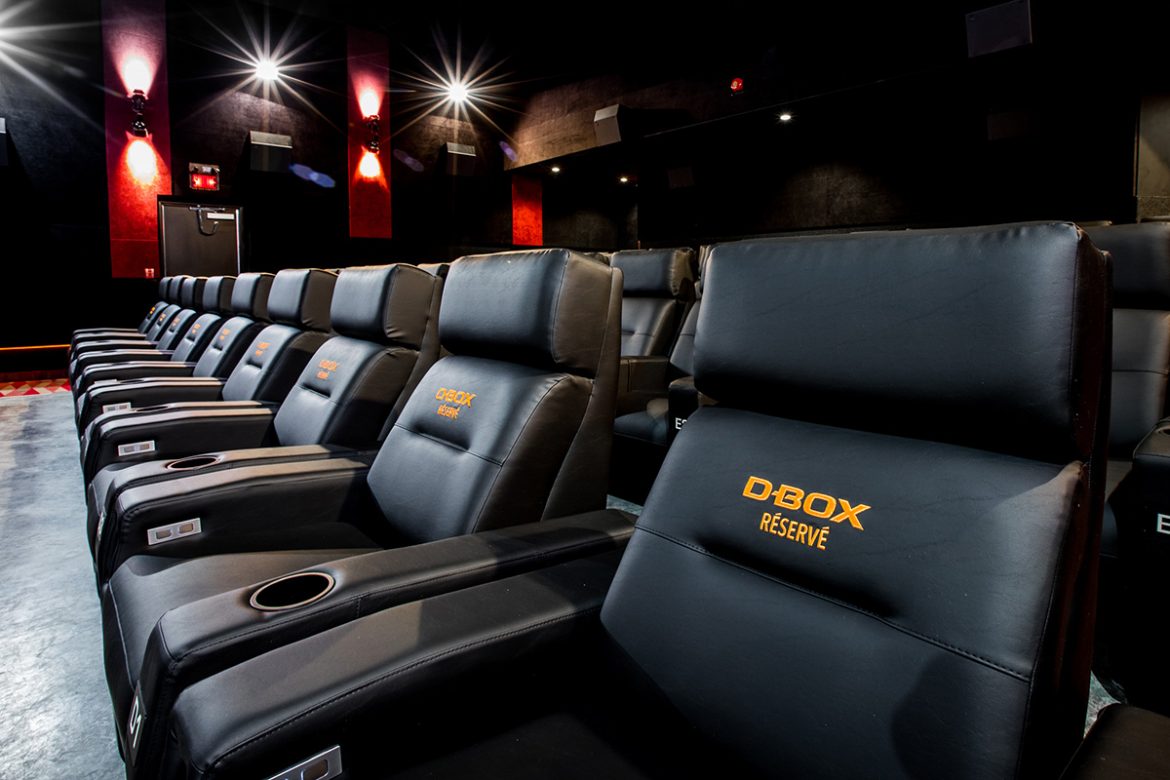 I recently decided to emerge from my self-imposed COVID-related exile and go out in public for a purpose other than survival. A movie sounded like a good option, but with pandemic isolation being what it is, I’ve been watching a plethora of movies over the past year and a half. I needed something more exciting. Action sounded like a good genre – but I wanted something more than just an action movie. So when I saw that No Time to Die was playing at my local theater with D-Box seats, I knew I had to give it a try.

If you’re not familiar with D-Box, that’s probably because it’s hard to get excited about obscure chairs. I mean, it is a chair, after all. But it’s a cool chair.

From their website, D-Box claims their product is a “highly precise and immersive haptic technology that provides feedback to the entire body and that sparks the imagination through motion.” Which is a lot of words to say that the chair vibrates and moves with the movie. It’s a hell of a cool concept. I mean, how awesome would it be to actually feel what’s going on onscreen? You just have to find one – they’re not in a lot of theaters.

The first thing you experience is that the D-Box seats are intense – and there’s a setting that lets you adjust the intensity. I left mine up at the highest setting – my wife turned hers down within two minutes of the film starting. I wanted to experience D-Box in full force, for better or worse.

I thought the best experience was in the first quarter of the film during the car chase sequence. James Bond was being chased and trying to escape via his tricked-out Aston Martin through rough, narrow streets with tons of sharp turns. And it was fantastic – I felt like I was in the car being driven by 007 himself. Each twist and turn. Each bump in the road. Even the inevitable crash. I felt it all – my body even felt like James Bond looked, tired and beaten up. It was the exact sort of intensity and immersion you dream about when going to the movies.

But I was surprised about some of the fight/shooting sequences. They felt… underwhelming. Gunshots and explosions. Kicks and punches. The seat moved and vibrated with them, but not in a way that immersed me further in the film. If the film was engaging enough, I didn’t mind them, but at slower moments, I found the movement distracting. I was occasionally focused more on the movement of the seat than the film. Perhaps it was just that the seat didn’t hit me where James Bond was getting hit. It’s hard to mimic a punch in the stomach when only your back and butt are touching the seat.

I’m glad I took the plunge and tried out the D-Box technology. At $7-8 extra per ticket, I’d argue it’s something to think on for a second. While I enjoyed it, I probably wouldn’t splurge on the D-Box seats for every movie where it was available. But when the right movie comes along, it could be awesome. Maybe a way to enhance the “jump scare” experience. Maybe the next innovation in racing films. Maybe the best thing to happen to Top Gun since planes were invented. Would enthusiastically recommend the experience to anyone, though I’d advise being selective with which film you choose in D-Box seats.

Self-professed nerd above all else, I'm a documentary and action film aficionado.